Buy this product for Poser and DAZ Studio via this link: http://www.daz3d.com/i.x/shop/itemdetails/-/?item=9117&m=d 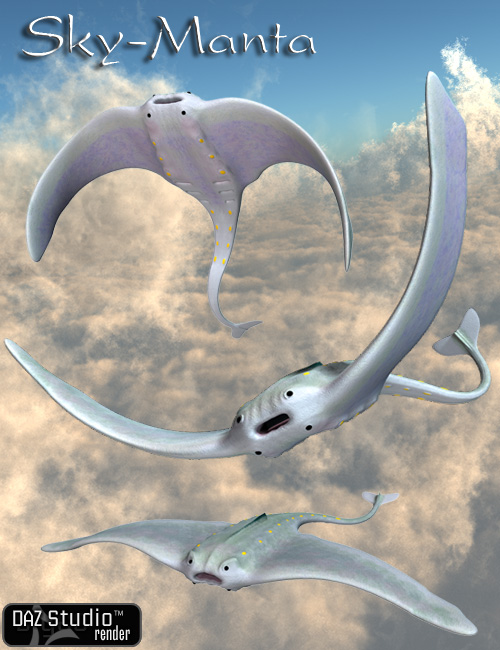 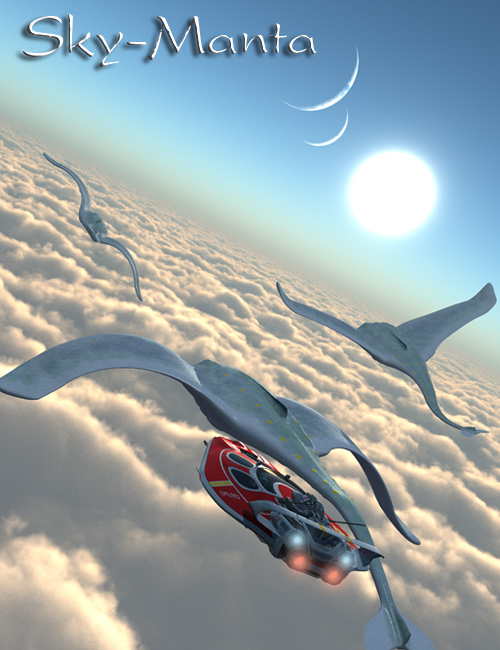 There are 2 sets of textures available for this creature - the only difference is the resolution of the texture maps. High-Resolution maps are 3072×3072; Low-Resolution maps are only 512×512, and are therefore much less resource-intensive. If you are loading the figure in the foreground, you should use the Hi-Res version, as the colour and displacement maps will show greater detail. However, if you are setting up the scene with a flock of these creatures in the background, the Lo-Res version will suit your purposes, and use only a minimum of available resources.

Form beautifully follows function in this aerial filter-feeder - the SkyManta is essentially a flying mouth, scooping up tiny organic food the same way that whales, whale sharks, and manta rays feed in earth's oceans. All it needs are wings, a tail/rudder, and sensory organs to move the mouth to where the food is!

Originally discovered soaring through the atmosphere of Jupiter-class gas giant planets, it appears equally at home in a variety of alien settings!

The 'SkyManta' in its native habitat is a large filter-feeder, with large pods (flocks? herds?) winging their way through the endless sky, feasting on floating clouds of aero-plankton and other tiny organic molecules, just as the largest creatures in Earth's watery oceans do…

Its flexible wings and tail bend and curve smoothly to aid its never-ending flight… With its four tiny compound eyes, gaping mouth, and rows of yellowish sonar-sensors down its body and tail, the creature looks completely alien - but to see it soaring through the sky is to appreciate its grace and beauty!

This creature was the first large animal discovered and described as we made our first tentative descents into the vastness of gas-giant atmospheres… opening up whole new frontiers in biology. As research data has grown, more questions arise: for example, we still do not know the upper limits of their size, as some truly immense specimens have been observed.

Soon after, smaller versions were observed flying through the skies of more earth-like worlds. In all respects they seem identical to their gas-giant brethren, however they do not seem to attain the same extremes of size. Further research is indicated.

Discovery of these creatures in such widely-varying environments has provided support for the 'Panspermia' theory - it seems that the SkyManta evolved in the gas-giant environment, and reproduces via eggs (spores?) which can float through space and then germinate/develop in the upper atmosphere of other planets.

For all its size, the SkyManta is amazingly light - possessing no bones, it seems to move via a system of pneumatic chambers in its wings, with air pumped in and out via muscular control to control the wing shape. This enables them to fly endlessly without the need for ever touching solid ground.