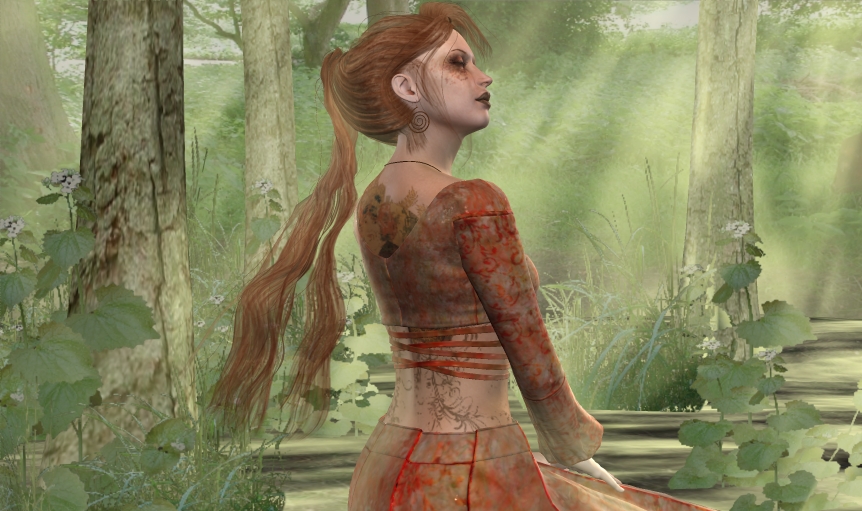 The basic idea behind volumetric effects is that the “atmosphere” material in your scene can be given some substance – it becomes hazy or translucent instead of perfectly clear. There are two places in Poser where atmosphere volume must be adjusted: within the material room, and on each individual light.

Start by setting your poser scene with your desired objects and props. I’ve found that volumetric effects are most dramatic when some of your figures are positioned near the camera while others are positioned farther away. (This “dramatic effect” happens because farther objects appear shrouded in mist while those in the foreground are clearer.)

*IMPORTANT: You must position some sort of backdrop behind your scene’s objects in order for volumetric effects to function! This object can be anything from a simple prop square to a commercially available backdrop figure. I have chosen to use the Woodland Realms Playset as my background for this tutorial. It includes a background prop.

Before adding the sunbeam, light your scene as you usually would.

*TIP: The sunbeam effect will be more dramatic if your ambient lighting is somewhat dim.

Step 3 - Set Atmosphere Strength on All Lights to 0

This step is important because you do not want the volumetric effects to show up on all of your lights, only the sunbeam light (which you will create in later steps.) To set “Atmosphere Strength” to 0, you can select each light individually and, in the Properties window, turn the “Atmosphere Strength” dial to 0 (as shown in the picture below).

However, since this can become very time-consuming, especially if you have very complex lighting in your scene, I have created a python script (click here to download the script) that will automatically perform this task for all lights in your scene.

*IMPORTANT: If you forget this step, you may end up with a render that is totally white, especially if you are using any infinite lights in your scene!

This sets up your basic scene. If you rendered at this point, it would look something like this: 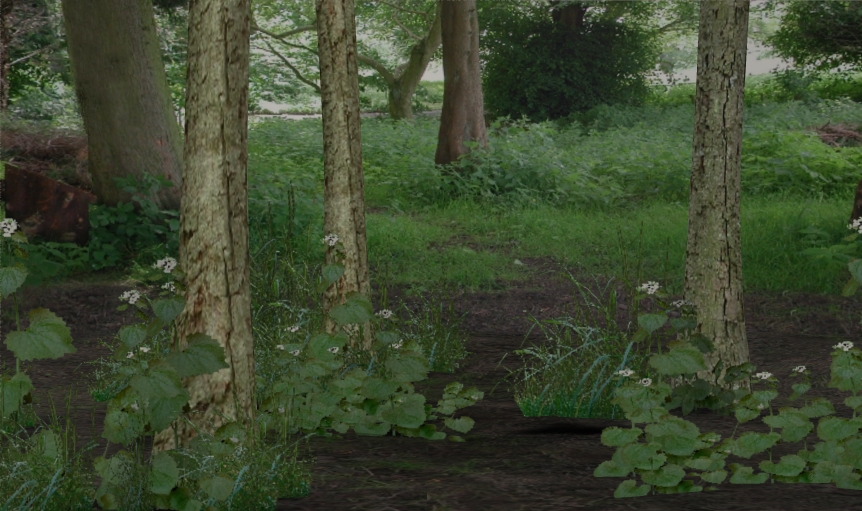 To give your sunbeam a hazy effect, you must turn Poser’s volumetric effects on. Start by entering the material room and selecting “Atmosphere” from the object pull-down menu. (The atmosphere is made of only one material, so there is no need to worry about the “Material” pull-down menu.)

Select the “Advanced” tab and locate the “Volume On” checkbox (shown in the picture below.) Put a check here to turn volumetric effects on. Next, locate the “Volume Density” number. This setting controls the maximum opacity of your atmosphere. If you entered “1” here, your atmosphere would be 100% opaque – like a concrete wall! I suggest using a density of around 0.01 for a misty/foggy effect but feel free to experiment. Remember, this number controls the maximum opacity of your atmosphere. You can also adjust the appearance atmosphere effects for individual lights. 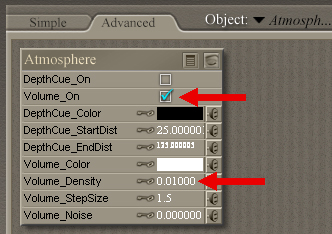 The other volume settings shown here allow further refining of your atmosphere. “Volume Color” changes the color of your atmosphere. I’ve left mine white to simulate fog. “Volume Step Size” controls how far apart planes of atmosphere are positioned from one another when rendered. (Poser creates volume effects by essentially filling the empty space in a scene with planes of translucent material, like slices of bread in a sandwich.) If you make this number very small, it will take a long time to render. If you make it too big, it can cause shadows and artifacts to appear. (And if you set it to “0”, you will turn volume effects off entirely – so don’t do that by mistake!) I’ve used a volume step of 1.5 but,again,feel free to experiment with this. Finally, the “Volume Noise” setting controls how grainy your fog appears. I’ve left this setting at 0 for a smooth, satiny fog.

For the next step, switch back to the Pose Room. Start by creating a spotlight. (Do not create an infinite light or your render may appear completely white!) You can double-check this setting in the “Properties” tab for the light, as shown below.

Then, using the “Light Control” tool, set the color and intensity of your light. (The location of these settings is shown below.) Finally, position and aim the spotlight where you want your sunbeams to go. For my render, I chose a soft yellow spotlight aimed toward the ground at an angle.

*Tip: If you would like your sunbeam to point directly at a figure or object, make sure you have the light selected and then open Poser’s “Object” menu from the top of your screen. Select “Point At” and then choose the figure you want the sunbeam to focus on.

There are two other things to look for in the “Properties” tab. First, make sure the “Shadows” box is checked. Next, look at the “Atmosphere Strength” dial. Adjusting this dial affects what percentage of your fog effect is observed by the light. In other words, setting this dial to 1 means that 100% of your atmosphere’s volume (which you set in the previous step) is illuminated. If you set this number to 0, you have essentially shut off volume effects for this light. In my scene, I set this value to 0.6. If you rendered your scene right now, it would look like this: 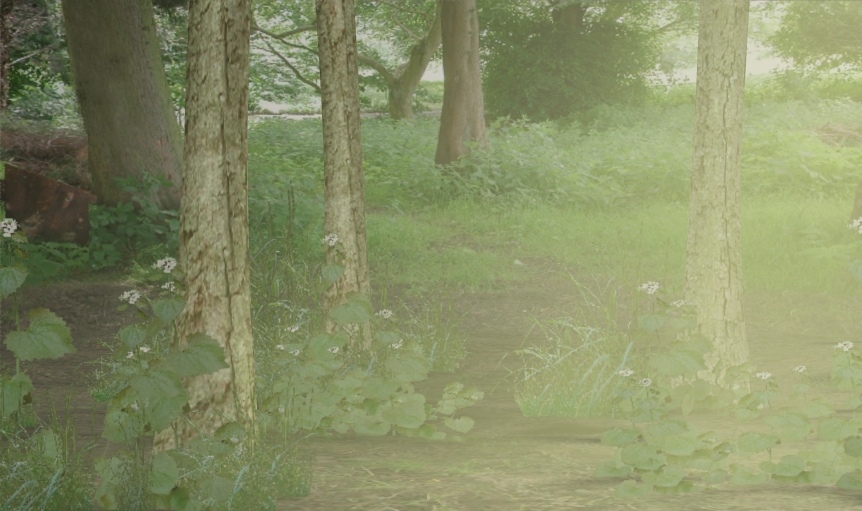 Your image is looking good, but it still lacks realism because real sunlight in a forest is filtered through overhead branches. To simulate this effect, you need to cover your spotlight with an image so that it casts shadows in a tree-branch pattern.

To accomplish this, you will need a black-and-white image to place over your light. I’ve included one here, but it’s simple enough to create one yourself in a graphic program such as Photoshop or Paint Shop Pro. Find a fairly high-contrast photograph of the object you want shadows for – I chose a picture of tree branches – and open it in your photo editor. Desaturate (or change the image to grayscale) to remove color from the photo and then adjust the contrast (or posterize) so that the image appears mostly black-and-white. Black areas of the photo will cast shadows, and white areas will allow light to pass through. (Feel free to copy and paste extra branches where you’d like them – it doesn’t have to be pretty!) The shadow map I created for this render looks like this: 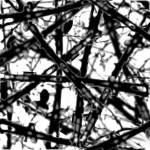 When you have an appropriate image, select the spotlight you just created and head into the Material Room. Select the “Simple” tab and click on the box under the “Color” selector (shown with an arrow below.) The “Texture Manager” box will appear. Click on the “Browse” button and select the desired shadow map. After you click “OK,” your shadow map should appear in the Texture Manager. For a dramatic shadow effect, set the “Map Strength” dial to 100%. For more subtle effects, turn the dial to a lower number. For my render, I went with a map strength of 100%.

Note: If your shadow map doesn’t appear in your render, make sure you double-check the “Shadow” dial in the light’s “Parameters” tab. This dial should be set at “1.” 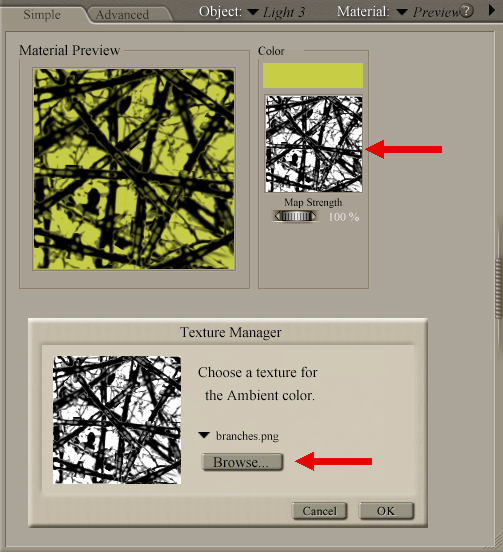 Okay, you're almost done! All that’s left is to render the image. Since Poser 4’s render engine isn’t capable of generating volumetric effects, you’ll have to render in Firefly. Make sure you have “cast shadows” selected in your render settings before you start. When you’re finished, your image should look something like this: 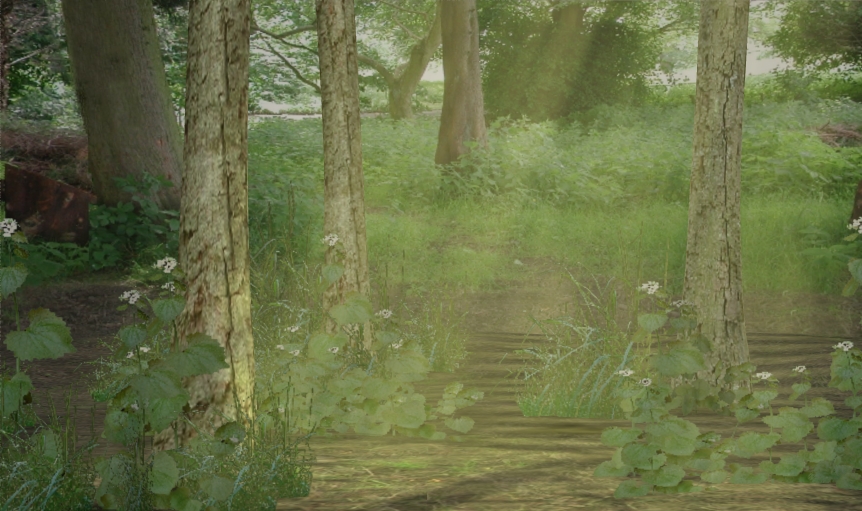 That’s it! This same technique can also be used to render moonbeams, foggy streetlights, or just about anything else you can think of! Experiment with shadow map textures to create an infinite number of effects!