Controls for modelling and rendering levels of smoothing can be found in the Carrara 8.5 assembly room. Users no longer need to enter the modelling room to adjust these values.

This tutorial assumes that the user has properly set up Carrara and knows how to load content from the Smart Content Pane or the Content Pane. It assumes the user knows the difference between a SubD model and a standard model.

In order to use smoothing on a model it must be a SubD model. Genesis and Genesis 2 are SubD capable as are figures like the Sub Dragon.

If the figure is not a SubD model then the smoothing controls will not be visible in the General tab.

A figure can be converted to a SubD figure in Carrara 8.5 by adding smoothing. Select the figure and go to Edit–>Smooth Objects. Check the the “Change Smoothing” box and select the “Smooth” radio button.

Smoothing can be added to legacy parametric figures but it should be done in the last step of the workflow. Once smoothing is added the figure will not pose and will act as a static object. 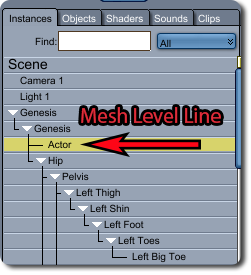 In order for the Smoothing options to show up in the General Tab the mesh level line of the model must be selected. This line is the third line down in the hierarchy. For the Genesis figure it is the Actor Line.

The mesh line can be identified for other figures as it won't have any children. 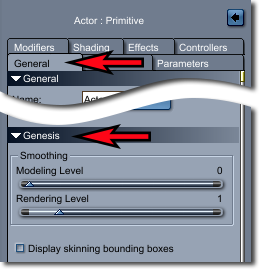 Smoothing Controls for render and model level smoothing can be found in the Assembly Room under the General Tab.

To access the controls Click the 'General Tab' and look under the section labelled with the model's name.

Carrara 8.5 gives the user the option to adjust two levels of smoothing:

Adjusting the value for either option can be done with the slider. The user can also click on the numeric value and enter in any integer value.

High levels of modeling level smoothing may cause Carrara to crash. Each level of smoothing increases the polygon count by a factor of four. Keep this in mind when choosing an appropriate modeling level.