Daz 3D strives to provide the ultimate user experience in each update of the DAZ Studio software. Along with various bug fixes, this update provides artists with new tools and workflow improvements that enhance ease-of-use and efficiency.

In this version, we have added a new photoreal render engine, called NVIDIA Iray, as well as corresponding elements to help make real-life renders, like HDR image environment maps and a caustic sampler. We have also included improvements to several currently existing sections, like changes to the preset save filters and the Move to Floor feature. The Shader Mixer pane also includes significant improvements and additions.

The NVIDIA Iray render engine simulates real-world lighting and practical material definitions so anyone can interactively design and create the most complex of scenes. With predictable and physically based immediate visual feedback, Iray produces stunning imagery. 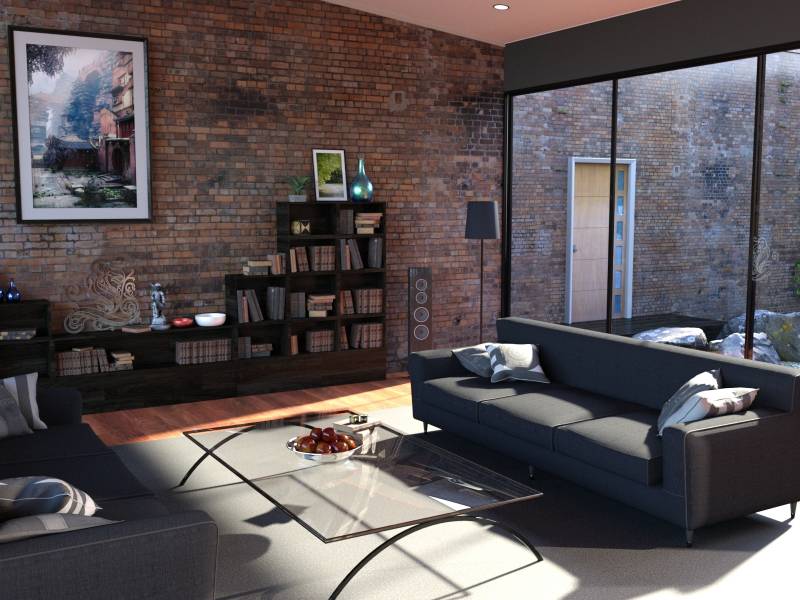 The Render Settings pane now includes an NVIDIA Iray render engine option1). The Editor and Advanced pages offer the option to choose which render engine to use; the active renderer.

The Render Settings pane also now provides access to Light Path Expression (LPE), when NVIDIA Iray is set as the active engine. LPEs allow light contributions in the scene to be isolated, or even on a per object basis, which provides full creative control in post production to achieve the desired look.

With NVIDIA Iray set as the active engine, the Advanced page now includes options for choosing which hardware to use. Under both Photoreal and Interactive Devices, there is the option to choose if the CPU or video card does the work or splits it, as well as the option for which card will render a scene, if more than one is available.

Physically based rendering simulates the physical behavior of light and materials to generate photorealistic imagery, which means simple Sun & Sky systems paired with proper material settings will result in realistic scene lighting. The material settings can account for where light might be in a scene and create more realistic environments than if lighting were added manually.

The Sun & Sky system is based on physical models and is a simple way to add realistic daylight to exterior and interior scenes. Sun & Sky light is interactive and dependent on the time of day, orientation of the environment, and location of the illumination on a scene. 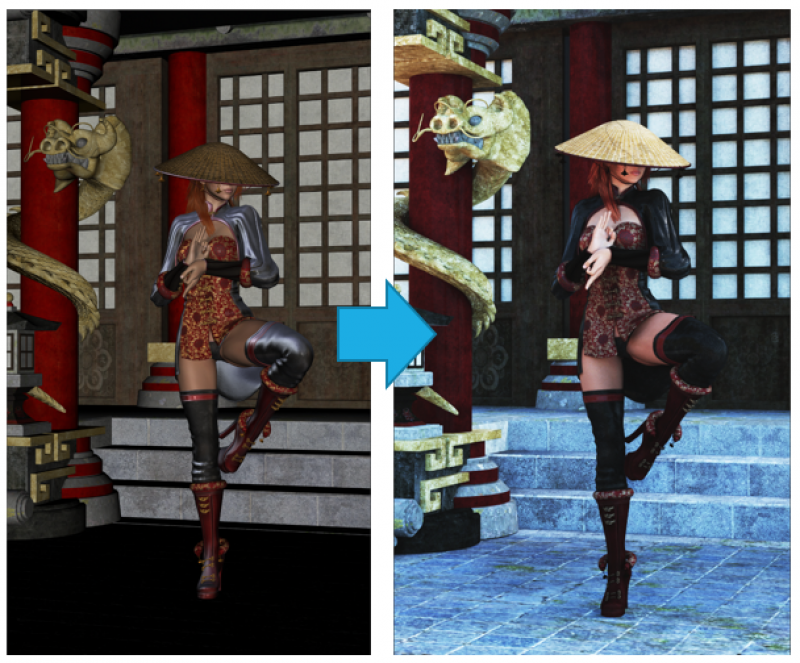 Linear high dynamic range (HDR) images participate in lighting the scene and are simple lighting setups that are based on real-world environment captures. In other words, HDR images display digital light in the same manner that light appears in everyday life by considering how light and the human eye work together. The eye naturally adjusts to how much light it takes in when indoors or outdoors. For instance, when indoors the eye's pupil will dilate to let in more light, allowing the eye to see more light in the room. In comparison, to compensate for sunlight, the pupil contracts when outdoors to let in less light. HDR images work with the human eye to increase or decrease the way light appears in a scene, like the pupil naturally does, and use tone mapping to set the light range within that scene.

HDR image environment maps use pre-calculated HDR images to calculate reality and interpret the image. So rather than adding various lights to a scene to imitate a scene's projected lighting, environment mapping includes all the real-life lighting the scene needs. 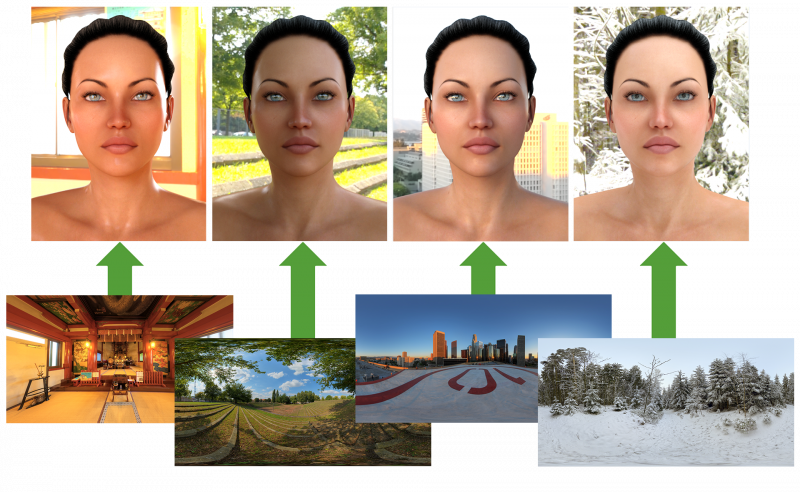 Iray Photoreal includes a built-in filter to roughly approximate a bloom/glare effect. Essentially the bloom effect is a fake feathering effect the human eye and camera lens create when light hits specific angles on an object. Bloom effect is an interpretation of the world rather than true physical and calculable light. Since HDR image environment mapping creates an environment based on calculations, the bloom effect will need to be added to give an Iray-rendered scene the illusion of realism. 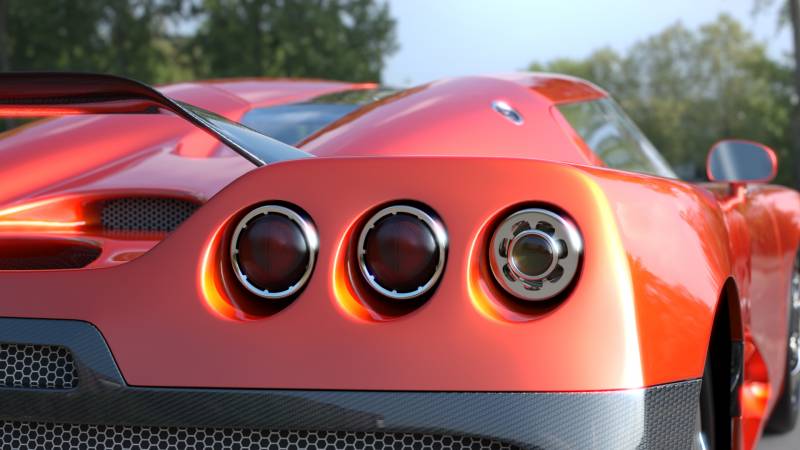 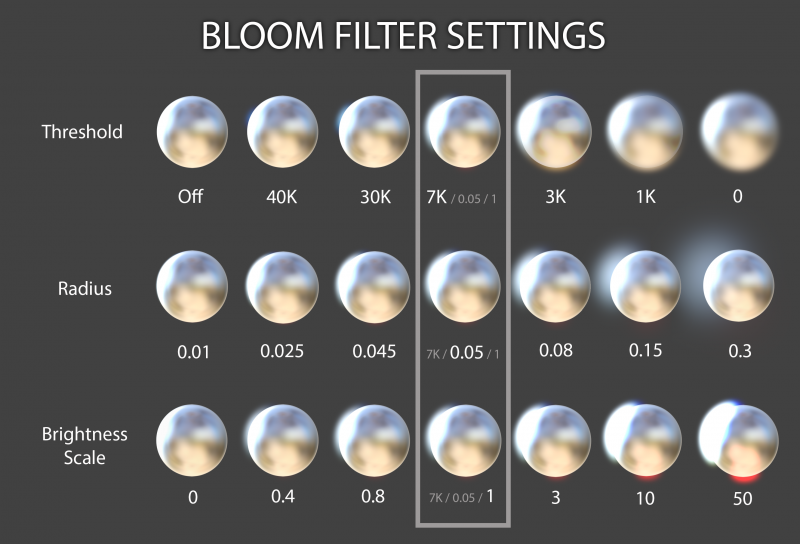 The Caustic Sampler renders algorithms that can simulate complex light paths, such as those that create caustics. Caustics reflect or refract light, often sunlight, as it hits a curved surface, like the caustic light created when light hits a goblet. Ray tracers create caustics by estimating where light beam paths might appear and accounting for both refraction and reflection onto another surface, such as the table a goblet sits on.

Turn Caustic Sampler on or off in the Editor page hierarchy under Optimization.

The NVIDIA Iray DrawStyle can used to preview the rendered scene directly within a Viewport, but it should not be used in multiple viewports at the same time since it is resource intensive and doing so will hinder interaction with the application.

The purpose of the NVIDIA Iray DrawStyle is to display what the scene will look like when rendered and it continually updates with each change to the scene. Some changes are more intensive than others, such as modifying the geometry of objects in the scene versus moving the position or color of a light or camera. 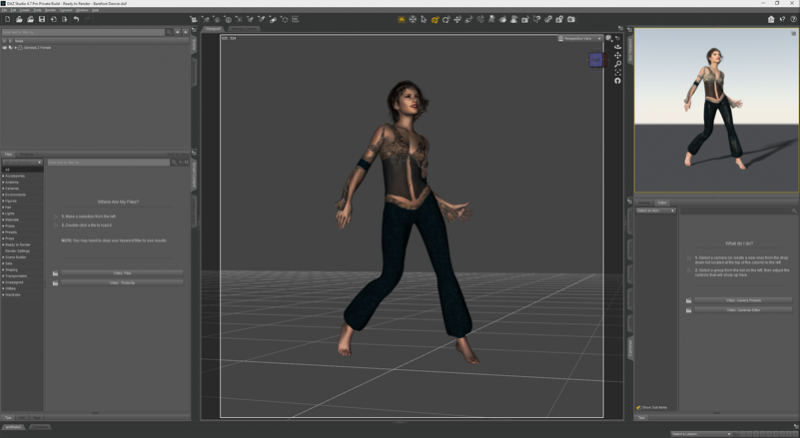 Iray generates imagery by simulating the physical behavior of light interaction with surface and volumes. In this same manner, Iray can create physically based materials that appear in real life and generate how light reacts to them, such as the differences between how light reacts with matted metal and how light reacts with plastic piping. Physically based materials are defined by Material Definition Language (MDL) and include various real-life effects, such as the scattering and absorption of light, surface coloring, and refraction properties. The NVIDIA Material Definition Language, NVIDIA MDL™, defines the properties of materials for all rendering modes of Iray. The material properties include the:

Other additional geometric properties of surfaces are also included, such as cut-outs, displacements, or bump maps, which are commonly not modeled in the primary geometric description.

At its core, MDL’s physically based hierarchical layered material model relies on:

MDL describes what should be computed, and then the renderer uses that description to decide how to compute the image based on the geometry, lighting, and camera settings.

Iray takes advantage of multiple importance sampling, improving quality and speed through MDL and separating the material properties from the rendering. The Draw Settings pane takes the DrawStyle options that were previously found in the Tool Settings pane and extracts them into their own pane in order to better support a growing number of options for some of the more complex DrawStyles, such as NVIDIA Iray. Controls for Active and Inactive Opacity as well as Bounding Box options can now be found here.

The Editor and Advanced pages offer the ability to change the DrawStyle for whichever viewport is currently active (highlighted when more than one viewport is on screen), such as from Texture Shaded to NVIDIA Iray. 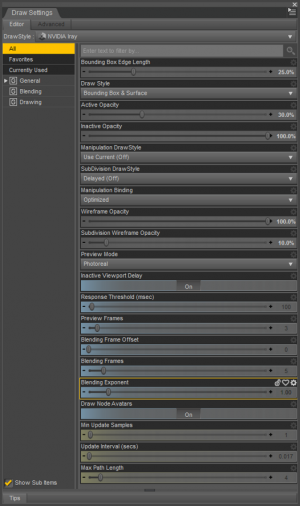 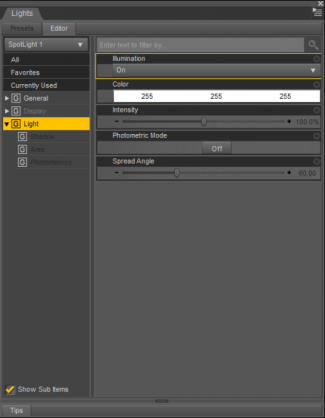 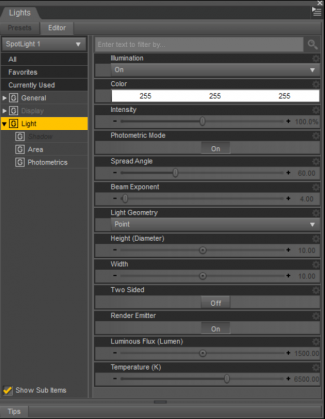 Iray Decals are texture projections that place items, such as stickers and labels, on objects in the scene. Under the Create menu, place a decal on a node or shape, like a box or shirt, then alter its surface and parameters with the Translation Manipulator to place the decal in ideal positioning. 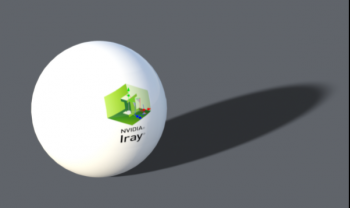 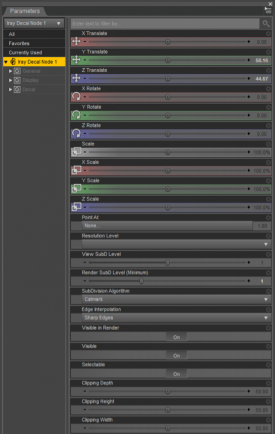 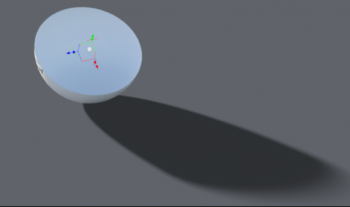 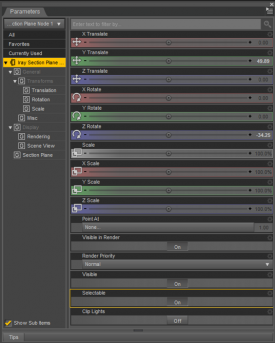 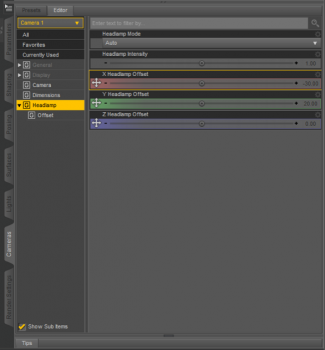 Accessible from the Surfaces pane, the Tags property on a surface provides each surface with the option to be associated with multiple tags, similar the Tags page in the Smart Content pane. Use a comma to delimit a list, such as in “red, scarf, clothing.”

These tags can then be used in conjunction with the Surface Selection tool context menu to select similarly tagged surfaces, in the same object or all objects in the scene. 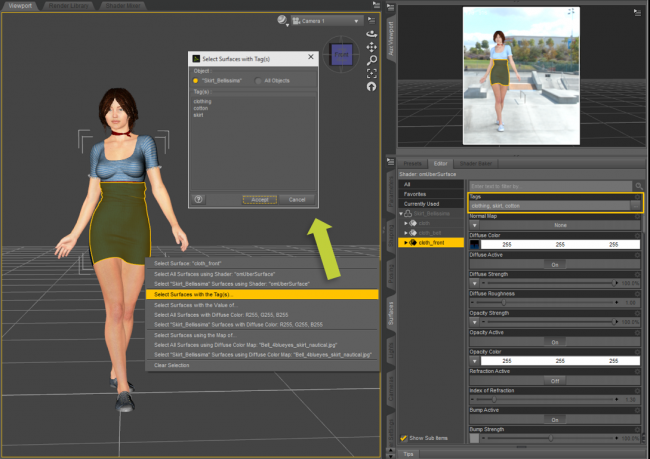 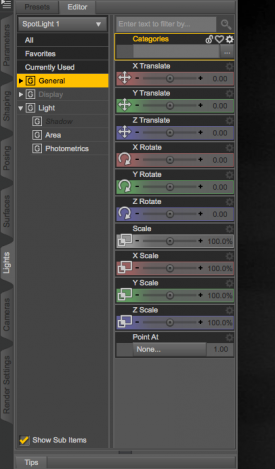 Specifically added for the 3Delight render engine, light category support works similarly to Surface Tags but is aimed at light nodes instead of surfaces. Like its name suggests, the Categories property that is now available on light nodes can be used to specify the category(ies) that a light participates in and the affect it has on the scene; it also requires support in the shaders applied to surfaces of objects in the scene to be fully utilized. Each light can be assigned to multiple categories with a flat list delimited by commas. 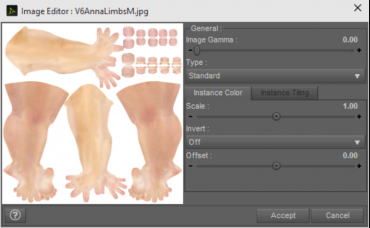 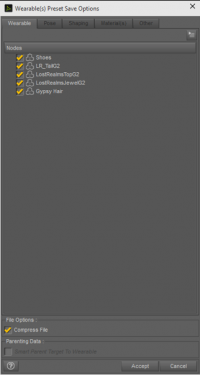 The Wearable(s) Preset Save Filter now provides options for including or excluding a specific joint or body part, such as an ankle or wrist, of the target figure's pose. The Material(s) Preset Save Filter has increased control, specifically over why and how a material(s) looks a specific way. Improvements to the handling of mappable properties now let the value or image associated with it to be selected on their own, allowing for finer grain control of how the material(s) appears and what can be saved. Check or uncheck the information to be saved.

New Check/Uncheck options allow for selecting and unselecting all values or images at once. New Check/Uncheck options allow for selecting and unselecting all values or images at once.

The Render Settings Preset Save Filter now has the option to save individual render settings, like a specific environment or tone mapping. Move to Floor improvements consider both the followers and parented props when adjusting a figure to where an environment or scene floor might be. For instance, when high heels are applied to a figure, Move to Floor will raise the figure's heels so the high heels touch the floor rather than go through the floor. The improvements also consider how the figure's stature and muscle movement will react when a prop he/she is holding touches the floor, such as the muscle shift in the torso and arms when a cane a figure is holding touches the floor.

The City Limits Lite Layout is updated and includes a new version. Reapply the layout for the new update. The User Parameters brick is a new brick designed to control what the user sees in the related property views of the interface. It can be found within the Bricks > Functions > Utility category of the Brickyard.

The User Parameters brick also provides a unique feature that allows it to be expanded so that its properties can be dragged and dropped between property groups as a means of managing how they are presented to the end user. The brick option menu and the parameter context menus provide additional options for managing the brick properties.

The Texture Instance brick lets the user assign a texture to a polygon in 2D space, drives a parameter by that texture, and provides access to instance color. This brick supports both RSL and MDL languages, allowing a single [hybrid] network to define a shader that works with multiple renderers.

Each new Mathematical brick, located under the Bricks > Functions > Mathematical > Operators category, basically function the same but perform their own math operation, like:

The math bricks create the result of the X and Y values, no matter the mathematical operation of the brick. The Operation setting allows for input type selection, while the Result Frequency setting includes options for:

The Direct Value brick, located in the Bricks > Functions > Utility category, is a new brick designed to set a value and pass it directly to an input parameter of another brick.

Specific improvements to the Shader Mixer pane include better customization and the option to choose which language is used—RSL, MDL, etc.—under Language Filter, as well as the option to view all languages at once.

Other additions include a Zoom-to-Fit option to automatically zoom when a shader is loaded; right-click to find the same option. Hold [ Ctrl/Cmd ]] and left- or right-click to simultaneously zoom and navigate the Shader Mixer pane. Or hold [ Alt ] to move side to side (pan) on a PC.

The Brickyard now includes NVIDIA Iray/MDL support, in both the Bricks > Functions and Bricks > Roots categories. Note that all of the bricks under Bricks > Functions > MDL are new, much of which is still in the Alpha or early Beta stage of development; the exception being Custom MDL.

1)
Only supported by the 64-bit version of DAZ Studio; it does not appear as an option for the 32-bit version.