Less Can Be More!

Controlling morph and weight projection through mesh density and placement


Transfer Utility is a powerful tool that uses the proximity of geometry to project morphs and weights from one mesh to another, but its not without its limitations. The purpose of this article is to illustrate how an artist can improve and control the results that Transfer Utility provides, through the conscious and mindful placement of mesh resolution during the modelling process.

Because projection happens based on the source mesh’s vertices and their proximity to the vertices on a target mesh, it is recommended that the two meshes have similar mesh density. If the target geometry has a mesh density that is much greater than the source geometry, the resulting projection, be it weights or morph deformation, is blocky and overly rough. This is because the deformation from a single vertex in the source is transferred to multiple vertices in the target, all of which are in closest proximity to the same single source vertex. We can see this in the image below, where I have used Transfer Utility to project a morph from Genesis 2 Female onto a sports bra with a much higher relative mesh density. 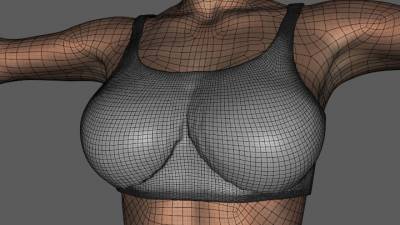 When the mesh density of the target geometry is reduced to be more in line with that of the source figure, a much smoother projection results. The image below shows a much lower resolution version of the same sports bra being worn by the same Genesis 2 Female shape. While still not ideal, the result is markedly improved. 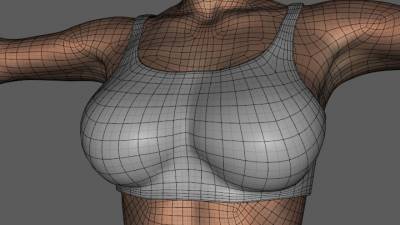 In addition to mesh density, mesh placement can be leveraged to control where the target geometry is able to deform. By further reducing the amount of resolution in specific areas of the target geometry, an artist can limit the deformation where it’s deemed undesirable. This happens by the simple fact that there are no proximal vertices in the target for the source figure to project to.

Below is an example of an even lower resolution sports bra, fit to the same Genesis 2 Female shape, with additional geometry removed from between and beneath the breasts. 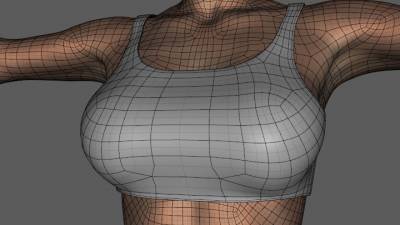 The result is a more realistic tension between and beneath the breasts. There is no mesh in the center of the breasts to receive projection information from the source, nor to support deformation in the those areas.

In this scenario there is also a distinct benefit to the resulting weight maps, allowing the pose deformations to extend their influence across the center of the figure. This can be compared in the final two images where raising the left arm of the figure results in a maintained tension of the fabric across the cleavage area in the refined version, but an unrealistic bend in the neckline and cleavage area of the original, high-resolution version. 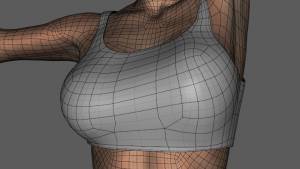 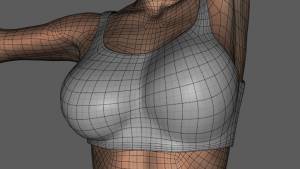