“Rigidity” is a function that protects areas of mesh from distortion when morphs are automatically generated to match a TriAx™ figure to which the item has been configured. Think of Rigidity as “Resistance to morphing.” An example would be a metal ring joining the two sides of a bikini top. If the user applies a morph to change the size of the figure’s breasts, Rigidity would allow the metal ring to remain round even though the dynamically projected morph might be otherwise. Rigidity is also useful for buttons, pockets, buckles, and anything else that should maintain its shape or position relative to a reference point on the rest of the mesh, regardless of morphs applied to the underlying character.

The following steps assume the content creator is starting with an otherwise fully modeled, grouped, and rigged conforming clothing item.

It is important to note that in its current implementation, Rigidity only applies to morphs that are dynamically generated and projected from the default figure to which the item has been fit. Morphs that are modeled into the clothing and joint rotations can still change the shape of a rigidly defined mesh if care is not taken to prevent it.

Using the Polygon Group Editor, assign a selection of facets to a newly created Rigidity Group as Rigidity Group Participants. These are the facets that will deform uniformly/rigidly as defined by a painted vertex weight map.

In this example, selection of the facets is made easier by using pre-defined material groups to control the selection. With the Polygon Group Editor open, one can access these options by right clicking in the scene: 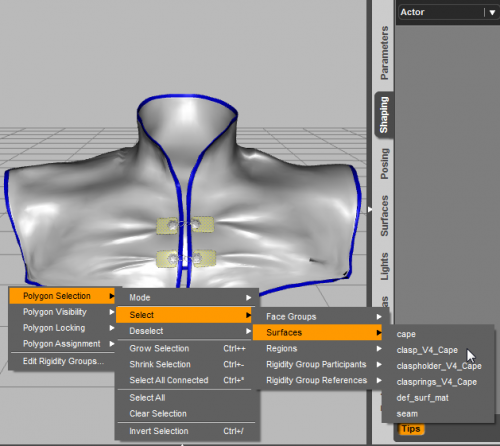 Use the context menu to assign the selected facets to a new Rigidity Group. This will automatically assign the facets as Participants. (the facets that will be affected by the rigidity map). Choose Polygon Assignment, Create Rigidity Group from selected. 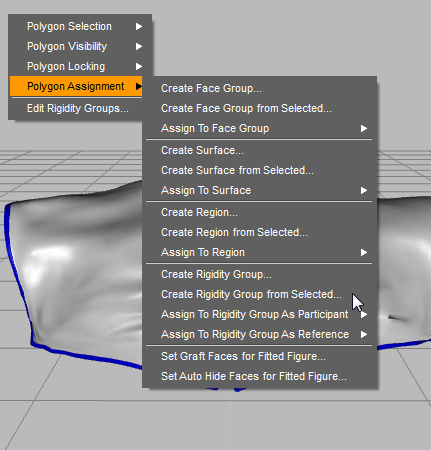 Using the Polygon Group Editor, assign another selection of facets to the same Rigidity Group, but as Rigidity Group References. These are the facets whose average deformation will be applied to the Rigidity Group Participants defined in Step one.

You may find it helpful to select and hide the Rigidity Participants so you can easily access the facets directly under or nearby to assign as Rigidity References. 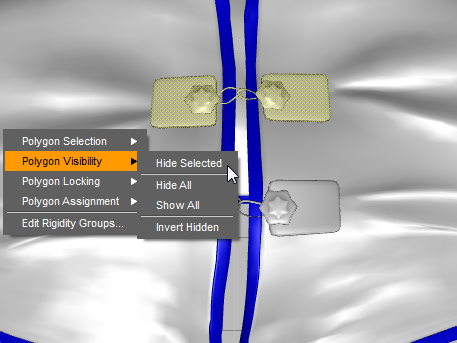 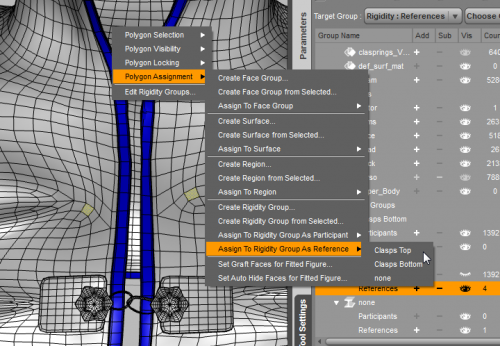 To select multiple polygons, hold down the Control key.

The strength of the effect will be determined by the figure's Rigidity Weight Map.

Open the Weight Map Tool, and the Tool Settings tab. In the scene tab, select the clothing item (the root). In the Tool Settings section look for the section stating “Unused Maps”. Rigidity Map should be listed. Click the “add map” button.

Under Map / Property, you should see the text “RigidityMap”. Select it. 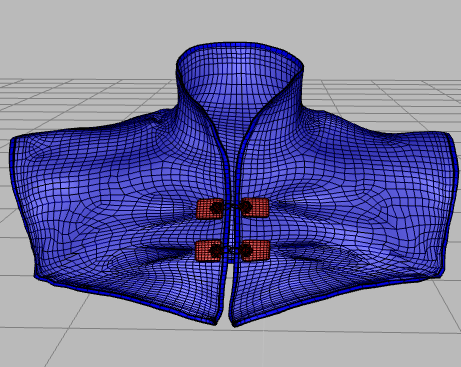 The strength of the map across the vertices of the mesh determines the level of rigidity, a full value of one (1), indicated in red, being completely rigid and a value of zero (0), indicated in blue being not rigid at all. A fully rigid vertex deforms as the average of the Rigidity Group’s References, whereas a zero weighted vertex deforms as determined by the projected morph.

You can easily select your Rigidity Participants using the right-click menu, then use the “Fill Selected Faces…” command. Repeated selections do not clear previous selections– use “Clear Selection” if you need to start fresh. 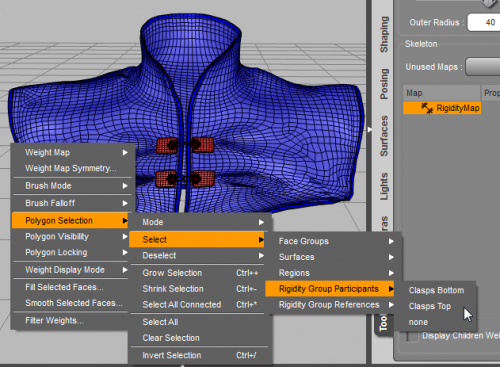 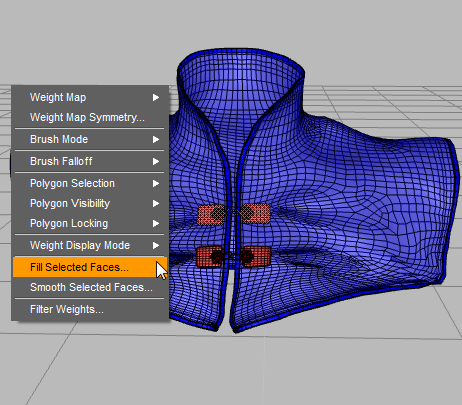 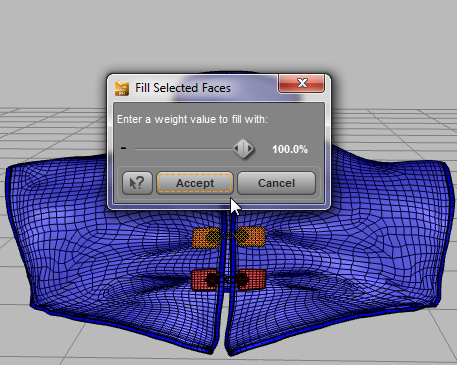 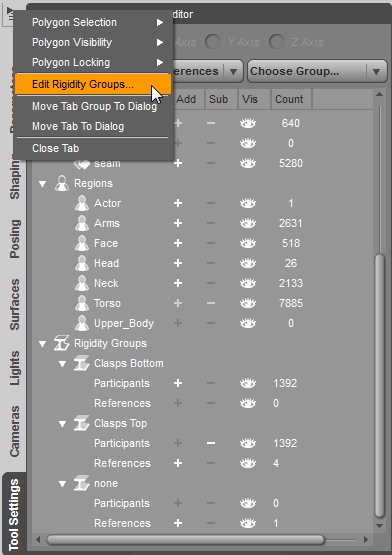 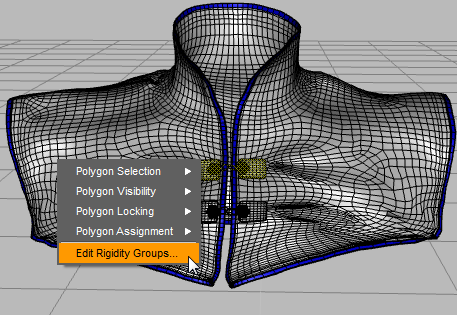 In particular, for features attached to clothing, like clasps and buckles, you may wish to disable scaling: 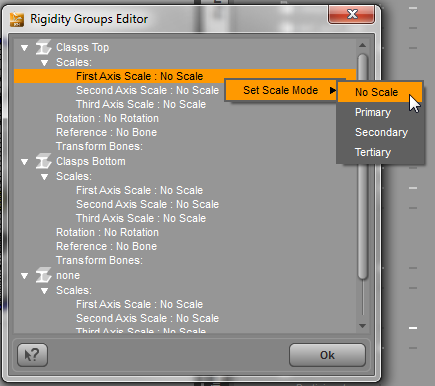 Save, and conform the new Rigidity equipped clothing item to the target figure. Test and adjust as necessary. Here, the Heavy shape is being used on Genesis. 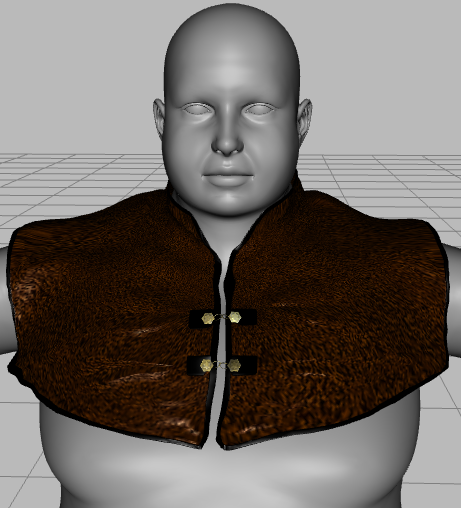 In addition to fixing the shape of elements on the surface of a model, Rigidity can also be used to modify how morphs affect elements that protrude from the surface. These may be items that are intended to be stiff, such as a scabbard, or flexible, such as a sash end.